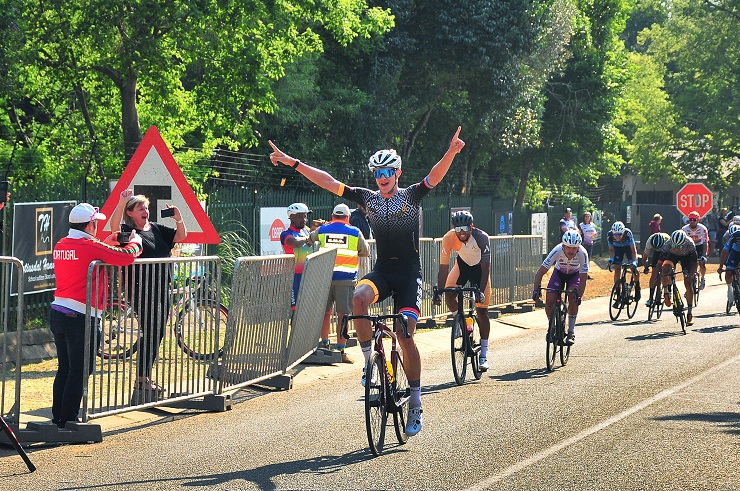 Marc Pritzen and Joanna van de Winkel showed their powerful forms to claim victory in the Satellite Classic, presented by Everything.Insure, which took place at Hoërskool Bekker in Magaliesburg on October 1.

This was the 23-year-old Pritzen’s maiden win, while the 40-year-old Van de Winkel secured her fourth straight title.

“I’m really happy with my performance at the Satellite Classic. I was still struggling with a bit of jet lag, because I travelled from Australia earlier in the week,” said Pritzen.

In the 106km men’s race, Pritzen beat Reynard Butler and David Maree to the line in a bunch sprint. The winning time was 2:27:16, with Butler and Maree finishing one second later.

“Our plan was to make it as hard as possible from the start, and for our young gun Jason [Eggett] to take the KOM at the top of Hekpoort,” said Pritzen, who rides for Honeycomb Pro Cycling.

He added that he pushed the pace of the climb just hard enough for no one to attack until the top when Eggett launched, but Jaco [van Dyk] managed to come around the former.

“After the climb we had Reinhardt [Janse van Rensburg] in the group and he is arguably the fastest rider in the race, so I decided to not drive the pace and told my teammates to attack if they feel they wanted to, but not pace. I needed the race to come back together to reset everything.

“After my teammates attacked numerous times, I saw an opportunity to go up the road and ended up taking Brandon [Downes], Jaco, Eric [Kros] and Reinhardt with me.”

Pritzen said he worked on the front with Janse van Rensburg for about 45km, and then decided it did not help if he had all his teammates behind, and they were dragging three riders and helping the fastest one in the bunch to the line.

“So, I sat up, and within a kilometre we lost our minute advantage. My teammates then did excellent work keeping the group together.

“I could just sit in and wait for any attacks to come. Quite a few attacks came, but none of them stuck.”

He said he knew it was important to get to the front at the finish.

“There was a bump in the last 500m where David crashed a couple of years ago. In the sprint everyone went early and I was just being careful over the speed bumps before I launched my final sprint into the corner.

“I managed to get myself into the corner first and ran a bit wide, but kept the bike upright and made it to the line first.”

The Kempton Park local felt that the event was well organised, safe, and that the route was fun.

“There was also a good turn out and I hope that these events will grow road cycling in SA again.

“We really need to look after our sponsors and try get them as much positive exposure as possible, so that we can have more high-profile teams in the country.

“This can take a while, because the sport is in the hands of our youth, so having these events and having youngsters look up to the elite riders and wanting to one day ride like Nolan [Hoffman] or Reinhardt is what will grow cycling in SA again,” said Pritzen, who will be competing in the elite race at the UCI World Gravel champs in Italy on Sunday.

Van de Winkel said that she was happy that she could claim another victory for the Sandton City-Cycle Nation team. 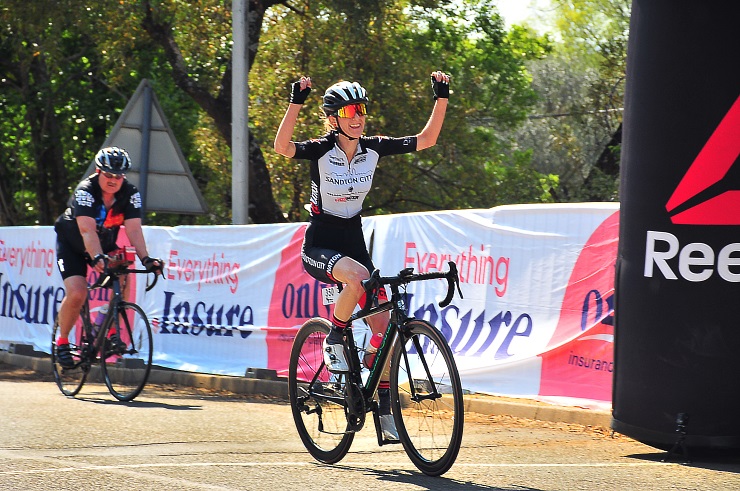 Joanna van de Winkel, 40, made it four in a row when she won the Satellite Classic, which took place at Hoërskool Bekker in Magaliesburg on Saturday. Photo: Wayne Hanscombe Photography

“The team puts in a lot of effort to support us; logistically and mentally during a race, so it’s really a great feeling to pull something off that we can celebrate as a team.”

The Hillcrest resident said that they went into the race with the goal of winning, which they always did, but she had to admit that she was not that confident because of Hekpoort coming within the first few kilometres in the race.

“You cannot ride away so early on and I’m not the best sprinter. We all knew that the Hekpoort climb would be a deciding moment in the race.

“We had decided to split the group here but not go all out as we wanted at least two of us over the top.”

Van de Winkel added that as they hit the base of the climb, Frances [Janse van Rensburg] attacked and Kelsey countered.

“I followed, and when I looked back, it was just the two of us. We rolled through comfortably on the climb.

“We were pleasantly surprised that Sonica, who is a young addition to our team and a bit of a wild card on the day, put in a huge effort to cross to us without bringing anyone else with from the group.

“As soon as she joined us, it was all guns blazing to keep our gap from the chasing bunch.”

Van de Winkel said they worked well together, increasing their lead until about 18km from the end where their pace slowed, and she ended up doing the majority of the work in front.

“After a quick chat with our team car, I attacked with about 17km to go and didn’t look back. It’s a really great feeling to come into the finish at your own pace.

“We were very impressed with Sonica who overcame many moments when she could have easily given up, but persevered to chase back and ride away in the final kilometres to take second.

“Well done to Kelsey for her third and Cherise [Willeit] who took the tricky bunch sprint for fourth.”

Van de Winkel said a stressful moment for her was dropping her chain and having to get off her bike to try put it back on, shortly after putting in a huge effort to attack 17km to go.

“I didn’t want my effort to go to waste. After managing to sort it out, my team car had to come tell me to calm down and remember to breathe again.”

She added that the highlights were riding around Magaliesburg and Hekpoort, which one did not usually have the opportunity to do with the traffic on those roads.

“I enjoy that route, the atmosphere, and bumping into some of my Joburg cycling friends again.

“It’s a great event and we’ll definitely be back next year to try claim another victory.”

This year’s Satellite Classic also consisted of a MTB Relay, which saw riders having to complete as many laps as possible within four hours.

Next year‘s Satellite Classic will consist of a road race on October 7, and an MTB Relay on October 8.